After a more than five-hour standoff police arrested an armed man who took three hostages at a clothing store near France's presidential palace Tuesday. 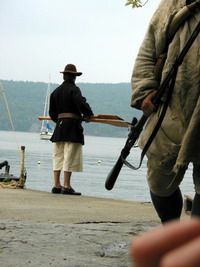 Police apprehended the man, who was armed with a knife, after cordoning off a vast area around the Sonia Rykiel store and persuading him to come out, a Paris police spokeswoman said.

Officers in plainclothes were seen whisking the man away from the scene. Further details were not immediately available.

The man, who was not immediately identified, had demanded to speak with a state prosecutor, and had not harmed anyone, the shop's manager said by telephone from inside. He declined to give his name.

The shop is located a few dozen meters (yards) from the entrance to the presidential Elysee Palace in Paris.

A Paris police official confirmed there was an armed man inside the shop, but declined to comment further.