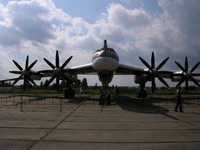 The incident occurred Friday, the same day that Russian President Vladimir Putin flexed his military's muscle by placing strategic bombers back on long-range patrol for the first time since the Soviet breakup.

Britain's defense ministry issued two photographs on its Web site showing one of the two RAF Typhoon F2s flying near the Russian Tu-95 strategic bomber, nicknamed the Bear, over the North Atlantic Ocean.

The ministry provided few details about where and why this happened, but the Russian warplane apparently was in international air space and approaching Britain's skies when it was shadowed.

Typhoon F2s are responsible for carrying out the quick-reaction alert policies of British and NATO air defense in Britain, the ministry said.

"These pictures convey disturbing echoes of the Cold War," he said in a statement. "They emphasize the importance of vigilance, the protection of our air space and the effectiveness of the response of the Royal Air Force."

In Russia on Friday, Putin announced that 20 strategic bombers had been sent far over the Atlantic, Pacific and Arctic oceans - showing off Moscow's muscular new posture.

"Starting today, such tours of duty will be conducted regularly and on the strategic scale," Putin said at the time. "Our pilots have been grounded for too long. They are happy to start a new life."

Putin said halting long-range bombers after the Soviet collapse had hurt Russia's security because other nations - an oblique reference to the United States - had continued such missions.

Soviet bombers routinely flew missions to areas where nuclear-tipped cruise missiles could be launched at the United States. They stopped in the post-Soviet economic meltdown. Booming oil prices have allowed Russia to sharply increase its military spending.

Norway sent F-16 fighter jets to observe and photograph the Russian planes, which rounded the northern tip of Norway and flew south over the Norwegian Sea toward the Faeroe Islands before turning back, said Brig. Gen. Ole Asak, chief of the Norwegian Joint Air Operations Center.

A pair of Russian Tu-95 strategic bombers approached the Pacific Island of Guam - home to a major U.S. military base - this month for the first time since the Cold War.