Bush meets PMs of Canada and Mexico to discuss immigration

President Bush met with his Canadian and Mexican counterparts in the resort town of Montebello, Quebec on Tuesday for the second day of a summit likely to produce pronouncements of North American unity to gloss over some key differences. 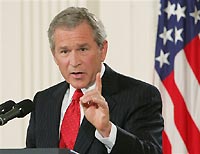 Bush meets PMs of Canada and Mexico to discuss immigration

Among the issues being discussed is border security, passport policies, Arctic waterways and the war in Afghanistan.

The two-day summit which ends Tuesday was overshadowed by Hurricane Dean, a fact that caused Calderon to rearrange his schedule so he could return home earlier than first planned, reports NPR.

Bush's unpopularity makes it virtually certain leaders will leave the nearby Montebello resort having accomplished little more than deepening conspiracy theories that the security and prosperity agenda is a cover for accelerated continental integration. Sure, a final communiqué, both written and leaked before the meeting began, boasts new commitments to open borders, but progress on most of the 300-item, two-year-old to-do list is too small to measure.

Canadians can take special comfort that nearly $2 billion a day in sustaining two-way trade with the U.S. may be insulated from another 9/11. And while evolving pandemic controls should reassure citizens of all three countries, there just isn't enough political will to fast-forward changes needed to ensure a reasonably safe North America is globally competitive, reports The Star.