According to state television, Ali Larijani also accused the United States of trying to undermine the progress made so far between Iran and the International Atomic Energy Agency, so as to increase tensions and pave way for new sanctions over Iran's controversial nuclear program. 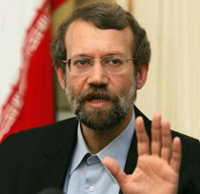 Larijani did not explain how Washington is allegedly trying to undermining the talks.

"If they (U.S.) take any illogical move, the trend of Iran's cooperation with the International Atomic Energy Agency as well as the talks will become fruitless," Larijani said.

The talks are critical because their outcome is to be the basis for a progress report by IAEA chief, Mohamed ElBaradei, before the agency's September meeting.

Recommendations from that meeting may build up or scramble Western efforts to impose a third round of Security Council sanctions on Iran for ignoring U.N. demands it stop its uranium enrichment. The United States and key Western allies accuse Tehran of covertly trying to build a nuclear weapon.

Two previous rounds of talks, in Vienna and Tehran earlier this summer, appeared to have improved relations between Iran and the U.N. agency and could possibly lead to more answers from Tehran on remaining questions about over two decades of Iran's nuclear activities.

Larijani said the U.S. and its allies won't achieve anything by coercion and threats.

"What have they achieved from their hardline approach so far? Have they succeeded stopping our nuclear technology?" Larijani asked.

Iran has vowed to carry on the enrichment, insisting the program was peaceful and geared solely toward producing electricity.

Faced with the possibility of harsher sanctions, Tehran last month offered a rare concession and allowed IAEA inspectors to revisit a heavy-water reactor under construction outside Arak, central Iran, that has been off-limits since April.

The Arak facility could be used to produce plutonium once it is completed sometime in the next decade, and the Security Council has demanded Iran stop construction. Plutonium, like uranium, is a possible pathway to nuclear arms.

The U.N. Security Council has already slapped two sets of sanctions, mostly economic and mainly targeting Iran's nuclear and missile programs. Iran has rejected both as illegal, saying it won't give up its right to enrich uranium and produce nuclear fuel.