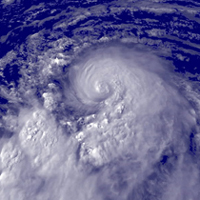 Officials in the state of Texas braced for the possibility of flooding or even a direct hit from Hurricane Dean, which struck Mexico's Yucatan Peninsula early Tuesday and was forecast to make its way to Central Mexico.

Forecasters said the outer bands of the Category 5 hurricane could bring heavy rain, flooding and gusty winds to the Rio Grande Valley if it continues on its expected path across the Gulf of Campeche in the next two days.

Unlike the devastating hurricanes of 2005, Katrina and Rita, Dean was not expected to swing far enough north to endanger the Gulf of Mexico's oil and gas drilling regions, and a drop in oil prices Monday reflected that. Royal Dutch Shell PLC and Chevron said they would evacuate nonessential personnel from deep water facilities but production would continue at normal levels.

Still, Jack Colley, chief of the Texas Division of Emergency Management, said emergency officials were prepared for the possibility that the storm could change course and veer toward Texas.

Dean had sustained winds of 160 mph (257 kph) as it closed in on the Yucatan Peninsula just north of the Mexico-Belize border. Category 5 storms -capable of catastrophic damage - are extremely rare. Only three have hit the U.S. since record-keeping began.

Evacuation orders issued over the weekend remained in effect for parts of southern Texas.

The National Guard and search and rescue teams have been mobilized. Shelters were set up in 28 communities. As many as 80,000 barrels of gasoline have been shipped to Rio Grande Valley gas stations.

The state sent six C-130 aircraft to Cameron County in case any critically ill patients needed to be evacuated from hospitals. About 3,000 buses were on standby for possible evacuations.

The storm has already killed at least 12 people on its trip across the Caribbean.

Parts of Texas are still cleaning up from the flooding caused by the remnants of Tropical Storm Erin.

"If you live near the Texas coast, get your house and your belongings in order, gather the important documentation that you need in the event of an evacuation," Governor Rick Perry said.

Mayor Bob Pinkerton of the resort town of South Padre Island said there were no plans to evacuate as forecasts showed the storm heading far south of the Texas border.

But he said a state of emergency he declared Saturday would remain in effect and town emergency management officials remained on the ready.