After second intestinal bleeding, evangelist Billy Graham remained in fair condition Monday at a hospital near his home in the mountains of western North Carolina. 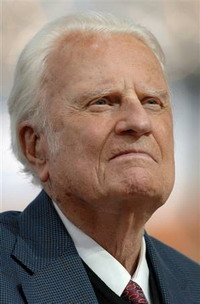 Graham, 88, was fully alert during the morning episode, said Merrell Gregory, a spokeswoman for Mission Health & Hospitals in Asheville. Doctors are still performing tests to find the source of the bleeding, she said.

Graham has been hospitalized since experiencing a first bout of intestinal bleeding on Saturday.

The hospital has said the initial bleeding may have been caused by diverticuli, or small pouches that can form in the lower intestine. A diverticular bleed often begins suddenly and may stop on its own, the hospital said. Graham spokesman Larry Ross said the minister experienced similar intestinal bleed during a 1995 trip to Toronto.

Graham, who suffers from a variety of ailments including Parkinson's disease and age-related macular degeneration, has been largely confined to his western North Carolina home in recent years.