Eleven people were injured, one of them seriously, on the Berlin set of Tom Cruise's new movie Valkyrie. 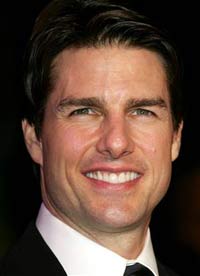 The 11 men, along with a companion who escaped injury, fell off the back of a truck on Sunday night. Police said in a statement that a bolt on a side panel of the truck apparently came loose as the vehicle turned.

Germany's Bild daily reported that Cruise himself was not involved in the weekend filming.

The extras were taken to a hospital, where all but one of them required only outpatient treatment. Filming work was stopped.

His casting has attracted controversy in Germany because Cruise is one of the best known adherents of Scientology, which the German government considers a commercial enterprise that takes advantage of vulnerable people.

Some critics maintain that one of its members should not be playing what some consider one of the Nazi era's few heroes.

The weekend accident happened during filming of scenes around the Finance Ministry, which was once the Nazis' aviation ministry.