Ugandan gays want to be accepted. But still they face regular abuse by police in a country where being gay is punishable by life in prison. 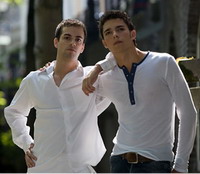 "Our message is simple and clear; let us live in peace," said Victor Juliet Mukasa, 32, head of Sexual Minorities Uganda - a previously little-known group that spoke to the media for the first time this week. "We are human beings and should have the same rights as any other citizen of Uganda."

Attitudes toward gays in Uganda are typical of those across the continent, where many countries outlaw homosexuality and where gays are prone to prejudice and violence.

"There is no question of equal treatment for these strange fellows," government spokesman Kirunda Kivejinja said. "Homosexuality is repugnant to the people of Uganda."

Police denied the accusation of abuse.

"Our role is to enforce the law, not to decide what is right or wrong," police spokesman Asan Kasingye said.

But Mukasa said the group's aim is to "start a conversation" about homosexuality and to urge the government to reach out to the gay community as part of its national AIDS policy.

"We want people to see who we are, so we can dismiss these rumors that homosexuals are rapists and pedophiles," she said. "So many of us have been abused by police."

Uganda has been lauded for its success in fighting HIV over the past 20 years, reducing prevalence from 18 percent in the early 1990s to 6.5 percent in 2005. However, recent studies by the Health Ministry suggest prevalence has increased slightly in the past two years.