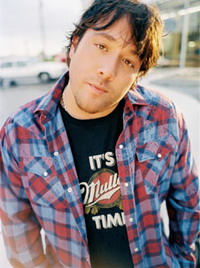 Shafer, 33, was being held on a $5 million (3.72 million EUR) bond after being arrested at a suburban Raleigh hotel, said Raleigh police spokesman Jim Sughrue.

Details of the incident were not provided.

Shafer was in Raleigh to perform at an outdoor concert Thursday.

He was scheduled to appear in court Friday afternoon, Wake County Sheriff's Office spokeswoman Phyllis Stevens said. Shafer was being held in the Wake County Jail.

Shafer's hits include a duet with country music star Kenny Chesney, "When the Sun Goes Down," for which Chesney was nominated for an Academy of Country Music Award in 2005.

A former disc jockey for rock musician Kid Rock, Shafer also won acclaim for "Follow Me" and a cover version of Dobie Gray's "Drift Away."

In North Carolina, a second-degree sexual offense constitutes engaging in a sexual act with another person by force and against their will, or with a person who is mentally disabled, mentally incapacitated or physically helpless.