A vintage bottle of champagne claimed by auction house to be plundered from Adolf Hitler's wine cellar was sold at auction Friday. 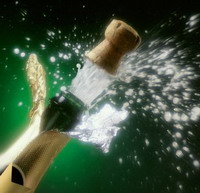 The bottle of 1937 Moet and Chandon was brought to Britain by a returning World War II soldier as a trophy, but never opened, Charterhouse auction house said.

"He had it given to him by a soldier who, as far as we can work out, retrieved it from the ruins of the Reich chancellery in Berlin after the Nazis were defeated in May 1945," said valuer Chris Copson, of the auction house in Sherborne, southwest England.

"They made their way in to the chancellery, the Russians had been there first, there was a lot of looting and the soldier and members of his unit took themselves a little souvenir of the event."

Copson said the bottle had been expected to fetch only around 500 pounds (US$992; 740 EUR), but was the subject of intense bidding.

But the new owner is unlikely to drink the contents, he said, as valuers believe it may have been contaminated by an Allied forces plot to target Hitler.

"There was a rumor that some of the bottles of champagne had been poisoned by injecting through the cork, which might be why the soldier never actually drank it," Copson said.