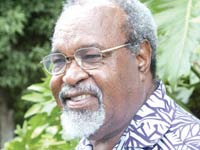 Somare won the support of 86 lawmakers in the 109-member Parliament. Speaker Jeffrey Nape rejected a nomination for former Prime Minister Julius Chan to be a candidate.

A total of 21 lawmakers stayed on the opposition benches with Chan, former Prime Minister Mekere Morauta and Bart Philemon, a former treasurer. The speaker only votes in the event of a deadlock and the 109th lawmaker is in prison.

After the vote, Somare, 71, said Papua New Guinea, the most populous South Pacific island nation with 6.1 million people, had experienced unprecedented growth under his previous government.

"We will use the experience to achieve even greater heights over the next five years," he said. "Today, I am happy to lead once again this large but manageable coalition government."