An earthquake hit the northern Los Angeles area just before 1 a.m. ( 4 a.m. EDT ) on Thursday, waking residents across a broad swathe of the area, but there were no immediate reports of significant damage. 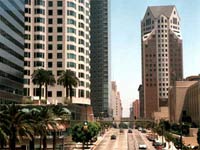 The 4.5 preliminary magnitude quake was centered 4.1 miles (6.6 km) north-northwest of the suburb of Chatsworth, according to the U.S. Geological Survey. It was extremely shallow, at only 3 miles (5 km) deep.

According to AP, there were no immediate reports of injuries or significant damage, Los Angeles Fire Department spokesman Brian Humphrey said.

The quick jolt was felt by residents across Los Angeles County.

"It was a real jerk, then a second jerk and then it just stopped," said Chris Harris, 57, of Canoga Park.

Harris, who was working at his computer when the shaking started, said a large picture fell off a wall in his home.

Chatsworth is about 30 miles (48 kilometers) northwest of downtown Los Angeles.