Musharraf: statements on US strikes in Pakistan "counterproductive" to counterterrorism fight

President Gen. Pervez Musharraf said Tuesday recent suggestions from the United States that it might launch unilateral strikes against al-Qaida in Pakistan were "counterproductive" to the fight against terrorism, the government said. 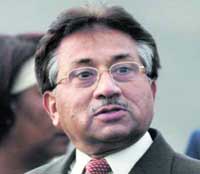 Musharraf: statements on US strikes in Pakistan "counterproductive" to counterterrorism fight

Musharraf's comments were the highest-level rejection by Pakistan of comments by senior U.S. officials and presidential candidates about the possibility of U.S. strikes within the country, a possibility that Pakistan views as challenging its sovereignty.

U.S. President George W. Bush said on Monday that America and Pakistan, if armed with good intelligence, could track and kill al-Qaida leaders in Pakistan, but stopped short of saying whether he would ask the Pakistani president before dispatching U.S. troops there.

Musharraf told visiting U.S. Sen. Richard J. Durbin in a meeting in the southern city of Karachi on Tuesday that Pakistan remained resolved to fighting terrorism, the Foreign Ministry said in a statement.

"He emphasized that only Pakistan's security forces, which were fully capable of dealing with any situation, would take counterterrorism action inside Pakistani territory," the statement said, citing Musharraf.

"In this regard, the President pointed out that certain recent U.S. statements were counterproductive to the close cooperation and coordination between the two countries in combating the threat of terrorism," it said.

The statement did not name anyone who made the comments mentioned.

A day earlier, Foreign Ministry spokeswoman Tasnim Asalam said there were no al-Qaida or Taliban safe havens in Pakistan. Last month, the U.S. National Intelligence Estimate indicated that al-Qaida may be regrouping in Pakistan's restive tribal belt on the border with Afghanistan.

Pakistan has recently stepped up its military presence in the frontier region, prompting reprisals from pro-Taliban militants.

In the latest violence, helicopter gunships and artillery bombarded two compounds near the main town of Miran Shah in North Waziristan, which were being used by militants to launch attacks on security forces, army spokesman Maj. Gen. Waheed Arshad said. There was no word on casualties.

Also Tuesday, two gunmen on a motorcycle opened fire on paramilitary forces in a town in North West Frontier Province, killing one, police official Israr Khan said. A a bomb exploded at a bus station in Peshawar, the largest city in the northwest, but no one was hurt.

Musharraf also expressed disappointment that the recent passage of a law that ties U.S. aid to Pakistan to achievements the country is making in fighting extremists.

Musharraf "said such legislation constituted (an) irritant in the bilateral relationship" between the United States and Pakistan, the statement said.

Bush signed the bill last Friday that requires the president to confirm that Pakistan is making progress in combatting al-Qaida and Taliban inside its territory before the United States provides aid.