The 3.2 million-year-old Lucy skeleton was spirited out of Ethiopia with no fanfare for a tour of the United States - a trip that some say is simply too risky for one of the world's most famous fossils. 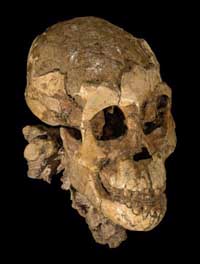 The fossil embarked on the voyage late Sunday or very early Monday, according to employees at the Ethiopian Natural History Museum in the nation's capital, Addis Ababa. Although the departure was expected this month, many were surprised at the way the skeleton's departure was handled.

"This is a national treasure," said Kine Arega, a 29-year-old attorney in Addis Ababa. "How come the public has no inkling about this? It's amazing that we didn't even get to say goodbye."

Paleontologist Berhane Assaw said he worked late Sunday at the museum only to arrive Monday morning to find that the fossil and key staff members had left for Texas.

The departure "should have been made public," he said.

The Smithsonian Institution in Washington has objected to the six-year tour because museum experts don't believe the fragile remains should travel. Even in Ethiopia the public has only seen the real Lucy remains twice. The Lucy exhibition at the Ethiopian Natural History Museum is a replica and the real remains are usually locked in a vault.

Lucy goes on display at the Houston Museum of Natural Science on Aug. 31, continuing through April 20, 2008. The other tour stops have not been finalized, according Melodie Francis, a spokeswoman at the Houston museum. But in announcing the plans to display the artifact last October, Ethiopian officials listed Washington, New York, Denver and Chicago as tour stops.

The fossilized remains were discovered in 1974 in the remote, desert-like Afar region in northeastern Ethiopia. Lucy is classified as an Australopithecus afarensis, which lived in Africa between about 4 million and 3 million years ago, and is the earliest known hominid.

Most scientists believe afarensis stood upright and walked on two feet, but they argue about whether it had ape-like agility in trees. The loss of that ability would suggest crossing a threshold toward a more human existence.