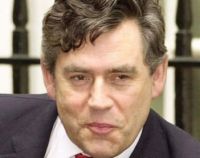 The meeting held at the Downing Street office one month after gaining cult hero status for the way in which he challenged a man who was in a blazing jeep that was driven into a terminal building at Glasgow Airport.

"This is a very brave man and a very courageous man, and I think the whole country owes John a debt of gratitude," Brown said. "He is a hero, and we are proud of him."

After the short private meeting, Smeaton said he was "honored, humbled and bewildered."

"I really can't believe it. He's such a nice man, a true gentleman. I am totally stunned; you can see the smile across my face. I'm lost for words for once in my life," Smeaton said, standing outside the famous black door at 10 Downing Street.

A Web site praising Smeaton, www.johnsmeaton.com, appeared soon after his exploits and attracted over 500,000 visitors in just three days.

Smeaton, 31, said he had been taking a cigarette break when the burning Jeep Cherokee smashed into the front doors of Terminal One on June 30. He said he and other bystanders intervened when a policeman was attacked by one of the men in the car.

"He went straight for the officer and started to attack him," Smeaton said after the attack. "I thought, 'You're not hitting the police mate, there's no chance.' We all tried to get a boot in at him and just try to subdue the guy."