An overcrowded boat evacuating people from a flooded village capsized in a rain-swollen river in northern India on Wednesday, killing at least 28 people, officials said. 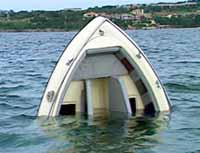 Some 80 people from the waterlogged village panicked and got on the boat that had a capacity for only 30 people. Unable to handle the weight it overturned mid-river, said Harpal Singh, a government official.

"Forty-five people swam to safety while 28 bodies have been fished out and search for others is on," said Singh, adding that some of the bodies were found three kilometers (2 miles) down river.

Most of those on the boat were women and children, he said.

The incident took place on the Rohni river near the village of Maharajganj, 300 kilometers (185 miles) southeast of Lucknow, the state capital of Uttar Pradesh.

Incessant monsoon rains in recent days have swollen rivers in the area and flooded some 50 villages.

Boat accidents are common in India, where overloading is common and few safety regulations exist.