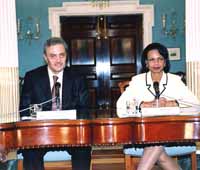 "We are interested in the peace conference," said Foreign Minister Prince Saud al-Faisal at a joint press briefing with U.S. Secretary of State Condoleezza Rice and Defense Secretary Robert Gates.

"When we get an invitation from the minister (Rice) to attend, when this takes place, we will discuss it and we will make sure that we attend" the conference, al-Faisal said.

Saudi Arabia has no diplomatic relations with Israel and its presence at a peace conference with the Jewish State would be a diplomatic breakthrough.

Al-Faisal also said Saudi Arabia would reopen an embassy in Iraq and continue to support U.S. efforts to pacify the country. He said the timing for the reopening was secret. Saudi Arabia has not had an embassy in Baghdad since the first Gulf War in 1990.

"We expressed our hope (to Rice) that we will work closely with Iraq regarding security aspects, especially terrorism," the foreign minister said.

A regional heavyweight and a top U.S.-ally, Saudi Arabia has been blamed for not being supportive enough of American efforts in Iraq.

The foreign minister insisted his country was supportive of the Iraqi government.

"As an indication of our good intentions, we let their (soccer) team win," al-Faisal said, referring to Iraq's soccer victory over Saudi Arabia in the final of the Asia Cup earlier this week.