About 16,000 people examined in Ukraine after toxic train derailment 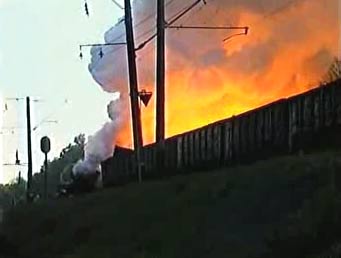 About 16,000 people examined in Ukraine after toxic train derailment

Haydaev said not all of those sent to hospitals had serious symptoms. "We hospitalized all children who feel discomfort in their eyes or throats, at their parents' insistence, but this does not mean they were poisoned," he said.

There were no reported deaths.

The accident occurred Monday when a freight train derailed outside Lviv, near the Polish border, overturning 15 of its 58 cars.

Transport Minister Mykola Rudkovsky said pressure valves were broken on the aging tanker cars, which should have been decommissioned five years ago. He said Ukraine has suspended rail shipments of yellow phosphorus.

Emergency Situations Ministry spokesman Ihor Krol said the situation was under control and there was no health threat, denying rumors that toxic smoke was drifting toward other regions of Ukraine.

President Viktor Yushchenko has criticized the government of his rival, Prime Minister Viktor Yanukovych, over its response to the accident, suggesting officials deliberately understated the health threat.

Viktor Bondar, deputy chief of the presidential administration, said Yushchenko has called for the dismissal of Rudkovsky, the transport minister. The president "gave a clear signal that there is no place for such ministers in the Ukrainian government," Bondar said.

Yushchenko interrupted his vacation in Crimea on Friday to visit the site of the accident, talk with residents of the area and visit local hospitals, his office said in a statement.

The Emergency Ministry said rescuers had righted three of 15 overturned tanker cars, preparing to transport them back to Kazakhstan, where they originated. Firefighters have sprayed fire-suppressing foam on the damaged tankers to prevent new blazes.

Phosphorus compounds are used chiefly in fertilizers, although they are important components of pesticides, toothpaste and detergents, as well as explosives and fireworks.

Elemental phosphorus can ignite on contact with air in temperatures above 40 degrees Celsius (104 degrees Fahrenheit), and can cause liver damage if ingested.

About 50 million tons of cargo - 70 percent of which include dangerous substances like chlorine, nitrogen, ammonia and petroleum products - are transported by rail through Ukraine annually.

The chemical blaze and health threat sent shock waves through Ukraine, where many still remember the 1986 Chernobyl nuclear power plant meltdown and explosion.