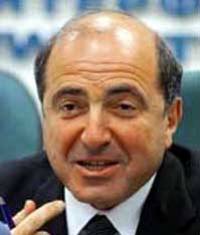 Boris Berezovsky is hated not only by Russians for machination – a court in Brazil issued an arrest warrant for him on charges of money laundering, ITAR-Tass reported Friday.

The warrant was issued Thursday by the federal court in Sao Paolo in a case involving the Media Sports Investment group, or MSI, a sponsor of the Corinthians soccer club, the Russian state-owned news agency reported.

A trial in absentia against Berezovsky opened Thursday in Moscow in a separate case. Berezovsky, a fierce critic of President Vladimir Putin who has asylum in Britain, is accused of embezzling millions of dollars from Aeroflot. Berezovsky calls the case a politically motivated farce.

The case in Brazil dates back to 2004, when MSI spent millions of dollars acquiring new players, which raised the interest of Sao Paulo state prosecutors. They wanted to know more about the investment group, its Iranian-born president Kia Joorabchian and the origin of the money he and his unidentified partners injected into the club.

"Who would invest this much money in a soccer team that has been in the red for years?" state prosecutor Jose Reinaldo Guimaraes Carneiro said when he started his investigation in February 2005. "And why?"

Later that year, he said the answers pointed to the Russian tycoon and money laundering.

"There is enough circumstantial evidence indicating that the MSI-Corinthians partnership is being used for the laundering of money, most of which was received from Boris Berezovsky, who is wanted (by Russian authorities) for crimes committed against the Russian financial system," Carneiro said in the summary of a 15-page report released after the investigation.

Warrants for Berezovsky's arrest could soon be issued by other countries as well, the Russian news agency Interfax reported Friday, citing an unidentified source. The source said the countries are "two or three European states."

The Brazilian warrant was the result of close cooperation between the law enforcement agencies of a number of countries, the source said.

The trial against Berezovsky in Moscow was postponed for two weeks so the court-appointed defense attorney could read the voluminous case materials. Berezovsky has ordered his own lawyers not to take part in the trial, which he said was part of a Kremlin effort to draw attention away from the poisoning death of his associate Alexander Litvinenko.