A group of women has begun a campaign for equality in Pamplona's famous San Fermin bull running festival - they want cow runs. 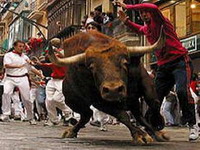 "If the boys run ahead of the bulls, we (women) have to run with the cows. It's pure logic," said a petition run on a Spanish student Internet Web site, www.estudiln.net on Tuesday.

The Web site said it had received dozens of messages of support for the initiative in recent days.

In the petition, the anonymous group asked for people to pass the message, "Cows Want to Run" as an SMS to friends on their mobile phones.

"Cows, like bulls have four legs too, and a natural instinct to run," the statement added.

"At the moment women can run with the bulls. What really would be discriminatory would be a woman-only run with cows," said Teresa Moreno, Pamplona government spokeswoman on equality.

One of the women behind the petition said in an interview with Spain's Cadena Ser radio that the idea was a joke that came about over real concern that not many women felt comfortable running with the bulls.

The highlight of the San Fermin festival, which began Friday and ends Saturday, is the morning run, held daily at 8 a.m. (0600 GMT) in which people test their mettle, stamina and daring by racing with six bulls along a 800-meter (875-yard) route from a corral to the city bullring. The bulls are fought by professional bullfighters each afternoon.

While most participants are men, some women take part in the runs.

The festival in this northern town, renowned for its all-night street parties, dates back to the late 16th century. It gained worldwide fame in Ernest Hemingway's 1926 novel "The Sun Also Rises."

"A cow-run would fill a fundamental void: what do we women do at 8 in the morning when the boys are risking their lives?" the manifesto asked. "A little exercise after so much alcohol and food, would do us no harm."

It said the introduction of a cow-run "would make our festival greater and place Pamplona at the vanguard of traditional fiestas with total quality between males and females, men and women."