A Georgia judge released Monday a man sentenced to 10 years in prison for consensual oral sex with a 15-year-old girl when he was 17, a sentence that had been widely criticized as grossly disproportionate to the crime. 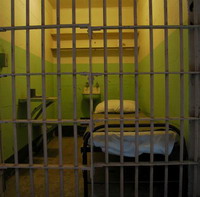 Monday's ruling does not ensure Wilson's freedom, though.

Georgia Attorney General Thurbert Baker said Monday afternoon that he had filed notice of appeal, arguing that Georgia law does not give a judge authority to reduce or modify the sentence imposed by the trial court. He said he would seek an expedited ruling from the Georgia Supreme Court.

Tracy J. Smith, a public affairs officer for the state Department of Corrections, said Wilson, now 21, would not be released until the department receives guidance from the state attorney general's office or from the court that originally sentenced Wilson.

Wilson's lawyer, B.J. Bernstein, said she plans to apply for a bond to release him while the appeal is pending.

The judge's ruling Monday threw out Wilson's 10-year sentence and amended it to misdemeanor aggravated child molestation with a 12-month term, plus credit for time served, and he would not be required to register as a sex offender.

"If this court or any court cannot recognize the injustice of what has occurred here, then our court system has lost sight of the goal our judicial system has always strived to accomplish ... justice being served in a fair and equal manner," the judge wrote.

When the judge's order arrived Monday morning, Wilson's lawyers had applauded and hugged his mother, Juannessa Bennett, who wiped away tears.

"I just feel like a miracle happened," Bennett said.

A jury had found Wilson, an honor student, guilty in 2005 of aggravated child molestation for having oral sex with a 15-year-old girl during a 2003 New Year's Eve party involving alcohol and marijuana. Although the sex act was consensual, it was illegal under Georgia law.

Wilson was also charged with rape for being one of several male partygoers to have sex with a 17-year-old girl, but was acquitted. The party at a hotel was captured on a videotape that was played for the jury.