British Prime Minister Tony Blair brought his farewell tour to Sierra Leone, where his government is lauded for sending peacekeepers and moving to ensure an accused warlord linked to atrocities faced trial. 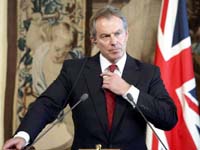 Blair arrived Tuesday at the airport in Lungi, near the capital, Freetown, accompanied by his wife, Cherie. Sierra Leoneans planned to express their thanks for what Blair has done for their battered country by crowning him a chief at a traditional ceremony and awarding an honorary degree from the University of Sierra Leone.

Blair had focused on development and aid for Africa during his decade as prime minister, and his final tour signaled that would remain a concern after he leaves office next month. He started in Libya Monday and was to wrap up in South Africa later this week. Aides said his agenda included trying to build support for action to stop the violence in Sudan's Darfur and end Zimbabwe's political and economic crises. Climate change, expected to have an inordinate impact on already struggling African economies, also was a focus of the trip.

The tour came under some criticism in Britain, where newspapers quoted an opposition politician as calling it a "vanity trip" because writers and photographers from Men's Vogue were reportedly part of the press entourage traveling with him. Ishbel Matheson of Minority Rights Group International, a private group that campaigns on behalf of ethnic, religious and other minorities worldwide, wrote in a commentary in the British newspaper The Times that Blair could have done more for Africa if he had focused more on "tackling corruption and supporting African democracy."

In Sierra Leone, though, Minister of Information and Broadcasting Septimus Kaikai called Blair a "God-sent force" for sending British peacekeepers.

"That timely intervention prevented more hostilities and carnage being inflicted on the people of this country."

Talks during Blair's half-day stop in Sierra Leone, where British troops have been deployed since 2002 as peacekeepers and then military advisers, would mark upcoming elections, the first since U.N. peacekeepers left, Blair's spokesman said. Sierra Leone emerged in 2002 from an 11-year civil war in which rebels overran villages and hacked off peoples' limbs to terrorize the population.

Britain under Blair supported the establishment of the United Nations-backed war crimes tribunal to try those who bear the greatest responsibility for Sierra Leone's war.

Next week, the court begins a trial at The Hague of former Liberian President Charles Taylor, who is charged with overseeing a campaign of terror, murder, mutilation, rape and enslavement during Sierra Leone's civil war. The charges stem from Taylor's alleged arming and training of rebels in Sierra Leone, which neighbors Liberia, during the later years of the insurgency.

While in Sierra Leone Tuesday, Blair was to meet President Ahmed Tejan Kabbah and address a press conference. Cherie Blair, a British lawyer, was to meet with women lawyers and other women's groups.

Ties between Britain and its former colony are close, and Blair has a personal connection - his father once helped oversee exams at a Sierra Leonean university then affiliated to England's University of Durham.

Britain had helped freed slaves from the United States, Nova Scotia and Great Britain come to Sierra Leone in the late 19th century and their settlement became one of its first West African colonies. Sierra Leone gained its independence in 1961.