Germany's parliament president expressed concern to his Russian counterpart Wednesday over the weekend detention of a German opposition lawmaker at a gay rights demonstration in Moscow. 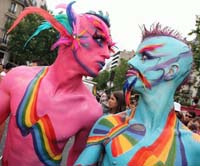 Green party lawmaker Volker Beck has said police beat him and others and took their passports away Sunday, in what he said authorities called a "security measure."

Parliament President Norbert Lammert, a member of Chancellor Angela Merkel's conservatives, voiced "the dismay of the Bundestag," or lower house of parliament, in a letter to Russian speaker Boris Gryzlov, a parliament statement said.

The demonstrators tried to present a letter signed by 40 European lawmakers to the office of Moscow's mayor, appealing at the city's ban on a march they wanted to conduct. Lammert said that should be viewed as "free expression of opinion."

He said he hoped a Russian parliament working group on the protection of minorities' democratic rights would look into the case.

Marco Cappato, a European Parliament deputy from Italy, was also among those detained on Sunday.