Iran's leader says country so powerful now, no one dare attack it militarily

President Mahmoud Ahmadinejad on Wednesday extolled what he described as Iran's self-sufficiency in producing army equipment and said Iran was so powerful now, no other country would dare launch a military strike against it. 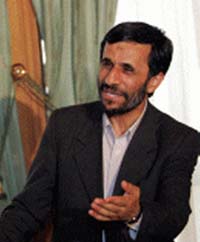 Iran's leader says country so powerful now, no one dare attack it militarily

"We have passed our point of vulnerability," Ahmadinejad told state television during a visit to an Iranian defensive equipment exhibition. "This means nobody would dare stage a military assault against our nation."

Ahmadinejad said possible adversaries were aware of Tehran's defense capabilities and said that Iranian national unity was also a key factor as to why no other country would attack Iran.

"I don't think there is an item that we cannot produce, if we need it," Ahmadinejad said.

The hardline president's remarks came as the U.N. Security Council was preparing to debate a third round of punitive measures against Tehran.

The Security Council has demanded Iran suspend uranium enrichment, which can produce both reactor fuel and - at higher levels - weapons-grade material. The council first imposed sanctions on Iran on Dec. 23 for rejecting its demands, then modestly increased them in March after Tehran refused to suspend the controversial enrichment.

After decades of relying on foreign weapons purchases, Iran now claims it is increasingly self-sufficient, with annual exports of over US$100 million (euro74 million) worth of military equipment to more than 50 countries.

Since 1992, Iran has produced its own tanks, armored personnel carriers and missiles, the government has said. In early 2005 it announced it had also begun producing torpedoes.

Ahmadinejad sees the U.S. military presence in Iraq as a serious threat to Iran's security. He urged the United States earlier in May to withdraw troops from the region, after U.S. Vice President Dick Cheney warned Iran sharply - from the hangar of an aircraft carrier in the Persian Gulf - that the U.S. will not allow Iran to develop nuclear weapons or dominate the Mideast.

Ahmadinejad's remarks followed Monday's landmark talks between Iran and the U.S. in Baghdad - a meeting that broke a 27-year diplomatic freeze between the two.

The talks in the offices of Iraqi Prime Minister Nouri al-Maliki were the first formal and scheduled meeting between Iranian and American officials since U.S. broke diplomatic relations with Tehran after the 1979 Islamic Revolution and the seizure of the U.S. Embassy.

"If Americans have new solutions for security problems, the path (for talks) is open," Larijani, who is also on Iran's Supreme National Security Council, was quoted as saying.

Larijani spoke before leaving Wednesday for Madrid, where he is to hold talks with EU's Javier Solana on possibilities for resuming negotiations over Iran's disputed nuclear program which the United States and the EU fear is being used to make weapons. Iran rejects Western claims, saying its program is for generating electricity only.

Larijani said the U.S.-Iran talks were a significant event, both in the region and internationally. In the Iraqi capital on Monday, Iranian Ambassador Hassan Kazemi Qomi said the two sides would meet again in less than a month.

"If we conclude that there is a will from ... (the U.S.) to solve problems and correct past wrongdoing, the negotiations will continue," IRNA quoted Mottaki as saying.

The talks had focused on Iraq and did not veer into other difficult issues burdening U.S.-Iranian relations.

Al-Maliki told both sides that Iraqis wanted a stable country, free of foreign forces and regional interference - a country that is not a base for terrorist groups. Al-Maliki also said the United States had no plans to launch a strike against Iran from Iraq.