Interior Minster Vasyl Tsushko, a central figure in the recent political standoff between the president and prime minister, has suffered a heart attack, a ministry official said Wednesday. She gave no information on his condition. 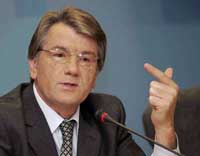 Last week, after President Viktor Yushchenko fired the country's prosecutor-general, the interior ministry sent police to surround the prosecutor's office to prevent him from being evicted. In the face of that defiance, Yushchenko claimed control of Interior Ministry's forces and sent some to the capital, although Tsushko refused to recognize the order.

The moves raised fears that weeks of argument between Yushchenko and Prime Minister Viktor Yanukovych could spill over into violence.

Tensions eased Sunday after the president and premier agreed to hold early elections on Sept. 30. But Tsushko's status has been shaky: the new prosecutor-general appointed by Yushchenko said the minister was being investigated for alleged abuse of power.

Tsushko was being treated in a hospital, said a ministry official who declined to give her name in live with policy.