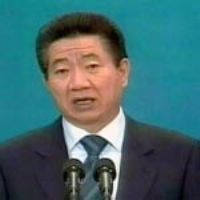 During the second day of talks between two Koreas, S.Korea urged its northern neighbor to shut down its nuclear reactor and gradually open their heavily armed border to regular train traffic.

The Cabinet-level talks - the highest regular channel of dialogue between the former wartime foes - come amid a heightening standoff over the North's refusal to implement a breakthrough nuclear disarmament deal reached in February.

North Korea pledged to close its Yongbyon reactor in exchange for economic aid and political concessions, but has not yet fulfilled its promise.

U.S. and Chinese diplomats discussed the matter in Beijing on Wednesday, while South Korea pressed the issue directly with the North in Seoul.

"We explained that implementing the Feb. 13 agreement is important in that efforts to denuclearize are the basis for peace on the Korean peninsula," South Korean spokesman Ko Gyoung-bin said after morning talks between the North and South delegations. "We stressed the necessity of implementing the agreement quickly."

South Korea also proposed formally restarting cross-border rail service between the countries in phases, and "in a way that benefits both the South and the North," Ko said.

Earlier this month, the two Koreas held a cross-border test run of trains on restored tracks, marking the first time trains have crossed the border since rail links were cut early in the 1950-53 Korean War. Fighting ended with a cease-fire instead of a peace treaty, leaving the two Koreas technically in a state of war.

South Korean President Roh Moo-hyun said separately Wednesday that the continued detente would eventually lead to reunification and pointed to the European Union as a model.

"People say that there is no concept of a border among European Union youth," Roh said. "The South and the North also need to make continued efforts to cooperate until they are unified while reaching out, making concessions and being graciously patient with each other."

In the morning session, North Korea did not mention the nuclear standoff or the South's recent decision to delay promised rice aid shipments to the North - a potential flash point in the negotiations.

South Korea is delaying shipment of about 400,000 tons of rice, with delivery originally set to begin in late May, over the North's delay in dismantling its nuclear programs.

While not complaining about the delay, North Korea emphasized that it expects the delivery to be completed, said Kim Nam-shik, a spokesman for South Korea's Unification Ministry.

Analysts had expected the rice shipments to be a sticking point and possibly to derail the inter-Korea talks, which are the 21st such meeting and are scheduled to run through Friday.

North Korea scuttled similar talks last year after the South snubbed an earlier demand for rice shipments, citing concerns about the North's missile tests in July 2006. Since then, North Korea has conducted its first atomic explosion.

On Wednesday, the North stressed that inter-Korean issues should not be disrupted by "outside forces," a reference to the U.S., which stations 28,000 troops in South Korea, Ko said. North Korea also called on South Korea to abandon regular joint military maneuvers with its American ally.

The South, meanwhile, asked for defense ministers from the two Koreas to hold a rare round of direct talks on easing tensions. Such talks were held just once, in 2000.

South and North Korean officials later visited an ancient fortress, where the North's chief delegate, Kwon Ho Ung, said, "A battle to protect oneself is justice. Justice always wins in the end."

Pyongyang says its nuclear programs are a necessary deterrent of any U.S. attack.

North Korea has been refusing to shut down its reactor until it receives funds from accounts in a bank in the Chinese territory of Macau. The accounts were frozen when the U.S. blacklisted the bank in 2005.

North Korea's US$25 million (EUR18.5 million) at Macau's Banco Delta Asia was freed earlier this year, but the North has not withdrawn the money, apparently seeking to receive it through a bank wire transfer to prove the funds are now clean. The U.S. had alleged the funds were tied to money laundering and counterfeiting.

The chief U.S. negotiator to North Korean nuclear talks arrived in China on Wednesday to discuss new ways to resolve the long-running banking dispute. Any breakthrough could help smooth the inter-Korean talks in Seoul.

"We're doing all we can to resolve this," U.S. Assistant Secretary of State Christopher Hill told reporters in Beijing. "We'll get it done, but it would be helpful if the North Koreans got on with their tasks."