Robert Zoellick, a Goldman Sachs executive who has built contacts around the globe as President George W. Bush's trade chief and as America's No. 2 diplomat, is the White House's choice to be the next World Bank president. 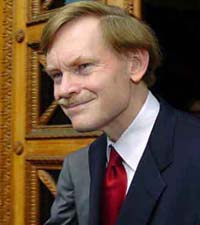 Bush was to announce the decision Wednesday, according to a senior administration official who spoke on condition of anonymity in advance of Bush's announcement.

Zoellick, 53, would succeed Paul Wolfowitz, who is stepping down June 30 after findings by a special bank panel that he broke bank rules when he arranged a hefty compensation package in 2005 for his girlfriend, Shaha Riza, a bank employee.

The controversy led to calls for Wolfowitz to resign from the poverty-fighting institution.

A seasoned veteran of politics both inside the Beltway and on the international stage, Zoellick is known for pulling facts and figures off the top of his head. He also has a reputation for being a demanding boss.

Bush's selection of Zoellick must be approved by the World Bank's 24-member board.

The bank's board in a statement late Tuesday made no mention of Zoellick by name and noted that any executive director could nominate a candidate. The board said it was essential that the next president, among other things, have "political objectivity and independence."

Zoellick announced last June that he was leaving his post as deputy secretary of state to join the Wall Street firm of Goldman Sachs and work to develop investment markets around the world.

If ultimately approved as World Bank chief, Zoellick will need to regain trust, rebuild credibility and mend frayed relations inside the institution as well as with its member countries around the world.

All those matters are critical for the bank's new leader, who will have to persuade countries to contribute nearly $30 billion over the next few years to fund a centerpiece bank program that provides interest-free loans to the world's poorest countries.

"The test of Zoellick is whether he manages to turn around the bank, which has been in huge disarray," said Elizabeth Stuart, senior policy adviser for Oxfam International, a group involved in helping the world's poor.

Zoellick could build upon strong relations he has developed worldwide as deputy secretary and U.S. Trade Represenative. He was involved in peace talks in Sudan and as USTR he played a key role in negotiations to bring China into the World Trade Organization. He forged free trade deals between the United States and other countries, including Singapore, Chile, Australia and Morocco.

Some global health and environment groups expressed concerns over Zoellick as the next bank chief.

Peru, however, welcomed the selection.

"My impression is that it's a good choice President Bush is making," Peruvian Foreign Trade Minister Mercedes Araoz told The Associated Press. "He was a driving force of the U.S. trade agenda in seeking association with developing countries, among them Peru."

The Wolfowitz episode threw the bank's staff into a revolt, strained relations with the Europeans, and threatened to tarnish the bank's reputation and hobble its ability to fight poverty.

Before taking the helm in 2005, Wolfowitz was the No. 2 official at the Pentagon and played a key role in mapping out the war in Iraq. From the beginning, Europeans and others were upset that Bush would pick someone to run the bank who was so closely associated with the war.