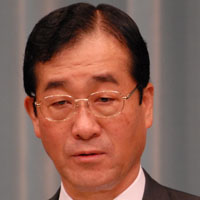 Agriculture Minister Toshikatsu Matsuoka killed himself in his Tokyo apartment Monday as he faced mounting accusations in a series of political scandals that have rocked the government.

"I apologize with all my heart for causing all the fuss and trouble because of my ignorance and lack of virtue," Kyodo News agency and several newspapers quoted Matsuoka as writing.

"Banzai to Prime Minister Abe, and to the Japanese nation," he wrote in the note, signed and dated May 28, Kyodo said.

The Mainichi newspaper said Matsuoka, whose funeral was held Wednesday, left a total of eight notes addressed to his staff or people he had worked with.

The suicide was a major blow to Prime Minister Shinzo Abe's government less than two months before he faces a major test in July elections for the upper house of Japan's parliament.

The reports on the content of one of the suicide notes came just as Matsuoka's private funeral was held in his home region of Kumamoto in southwestern Japan.

The Agriculture Ministry offered a silent prayer at noon, when the funeral was scheduled to start, a ministry official said on condition of anonymity, citing usual practices.

Chief Cabinet Secretary Yasuhisa Shiozaki said at a news conference that Abe was not attending, and that "the prime minister is extremely disappointed" that he could not go. Abe's wife, Akie, is attending instead.

Police refused to confirm details of the suicide notes. The Agriculture Ministry said the notes could not be immediately confirmed, and phone calls to his offices went unanswered.

Abe acknowledged late Tuesday that he had received one, and summarized that in it Matsuoka had thanked him and discussed Japanese agricultural policy.

Matsuoka, the first serving Cabinet member to kill himself since World War II, also was accused of receiving illicit political donations from contractors with the government-affiliated organization.

The day after his suicide, a former executive leapt to his death over a big-rigging scam linked to Matsuoka, fueling a scandal threatening Abe's beleaguered government.