Crisis in command at an immigration rally caused officers to beat demonstrators and journalists with batons and fire hundreds of rubber bullets to disperse the crowd. 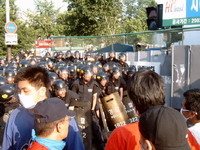 During the May 1 melee - images of which were broadcast across the world - many police officers in MacArthur Park could not identify their incident commander, said Police Chief William Bratton. The order to fire non-lethal projectiles was given by a commander a block away from park - not the deputy chief who was on the scene, he said after the city's civilian Police Commission was given a minute-by-minute account of the clashes.

He has previously acknowledged that a breakdown in command and communication led to the clash which he previously described as an embarrassment to the department.

Police said they moved on protesters after being pelted with rocks and bottles. While no one was seriously injured, dozens of citizen complaints were filed.

The incident had marred an otherwise peaceful day of immigration protests across the United States, and further sullied the reputation of a department repeatedly criticized for excessive use of force by some officers.

In a preliminary after-action report, Assistant Police Chief Jim McDonald took the five-member Police Commission step by step through events before and during the melee. He presented a slide show accompanied by audio of police radio traffic that highlighted chaotic conditions just before officers moved in on demonstrators.

Officers reported being targeted by "agitators" throwing rocks and bottles.

"We're getting killed over here," another said.

"Rocks and bottles are continuing. We have to push," said one report before officers swept the north side of the park.

On Monday, the Los Angeles Police Protective League, which represents the department's 9,400 officers, said budget cutbacks were to blame for lapses in training and called for "constant, updated" training procedures.

League president Bob Baker says training is "the backbone of police work" and called for a clear use-of-force policy for employing batons in crowd-control situations.