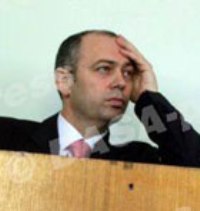 Valeriu Pasat, the Former Defense Minister who is serving a 10-year prison sentence for corruption over the sale of 21 fighter planes to the U.S., has gone on hunger strike, according to words of his lawyer.

Pasat has been drinking just water for the past four days to protest a refusal by authorities to let him see his wife and what he said was a delay in the trial, his lawyer Gheorghe Amihalachioaie said.

There was no immediate reaction from Moldovan authorities. It was the third time since Pasat was first arrested in March 2005, that he has staged a hunger strike.

On May 3, the Supreme Court overturned a lower court's decision to acquit Pasat of charges related to the sale and ordered a retrial.

Pasat, who was defense minister from 1997 to 1999 and head of the spy agencies from 1999 to 2002, was accused of selling the MiG planes too cheaply for US$40 million (EUR29 million). Prosecutors had argued that Moldova could have sold the planes to Iran, which had offered to pay the poor former Soviet republic US$90 million (EUR66 million).

Pasat, who has denied any wrongdoing, was also accused of selling grenade launchers to a Slovak company at a discounted price in 1998, causing Moldova to lose US$1.8 million (EUR1.3 million).

The United States has defended the 1997 sale, with a U.S. government representative testifying that Moldova could have faced economic sanctions if it sold the planes to a hostile country.