A former opposition lawmaker who supported President Mikhail Saakashvili's foe was found dead in his office in the Georgian capital on Monday, bound and gagged with tape. 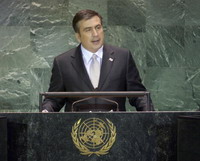 Zviad Tsekhladze, a businessman who had not been politically active in several years, was found by relatives who went to his Tbilisi office after he failed to answer his phone, Rustavi-2 and Imedi television reported. His face was taped up and his body bound to a chair with tape, the reports said.

Tsekhladze was a deputy in the ex-Soviet republic's parliament from 1999 to 2003 and a member of the Revival party. The head of the party, Aslan Abashidze, resigned as leader of the Adzharia province in May 2004 after losing a tense standoff with Saakashvili for control over the Black Sea coast region.

Tsekhladze had not been involved in the standoff over Adzharia. The ouster of Abashidze was a major victory for Saakashvili, who had been elected earlier in 2004 and promised to rein in unruly and openly separatist regions.

Police and security officials could not immediately be reached for comment on Tsekhlade's death.

It came after the fatal shootings of two leaders of small opposition groups in the Caucasus Mountain nation in recent weeks. Guram Sharadze, head of a nationalist movement, was killed in Tbilisi last week and Gela Meladze, secretary general of the political organization Mdzleveli, was shot dead in April.