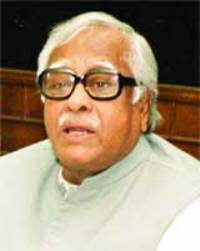 Babar was detained at his home in Dhaka, his aide Shafiur Rahman said. Law enforcers also confiscated his luxury private car. Babar served as the junior interior minister in Zia's government until it ended its five-year term in October 2006.

Hashem, who is also a prominent industrialist, was taken from his business office, his son Aziz said.

There was no official confirmation of the arrests, or what charges the detainees faced.

Later Monday, Sheikh Hasina urged the authorities to release Jalil and all other detained members of her party.

"The government seems to be cracking down on politicians instead of fighting real corruption," Hasina told reporters at her residence.

Bangladesh's military-backed interim government, led by Fakhruddin Ahmed, a former central bank governor who has the backing of the country's influential military, has vowed to fight corruption, reform electoral rules and clean up the nation's factional and often violent politics before holding the next elections  planned in 2008.

More than 170 politicians, businessmen and former bureaucrats have been detained as corruption suspects since the interim government took over in January under an emergency rule.

Bangladesh, an impoverished country of 145 million people, has been ranked as one of the world's most corrupt countries by the Berlin-based anti-corruption watchdog, Transparency International.