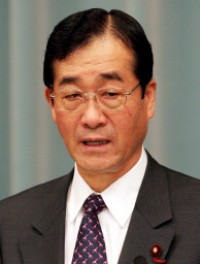 The death of Agriculture Minister Toshikatsu Matsuoka the first serving Cabinet member to kill himself since World War II comes amid plunging support for Abe's government over a series of scandals, and at a critical time ahead of the leader's first big test at polls in July.

"The effects on the Cabinet will be great," Abe told reporters before heading to Matsuoka's wake late Monday. "I feel deeply conscious of my responsibility as prime minister, and as the one who appointed him."

An autopsy on Matsuoka, 62, showed he had hanged himself, according to a Tokyo Metropolitan Police official who spoke on condition of anonymity, citing policy. He was found unconscious in his apartment shortly after noon on Monday and declared dead hours later.

Local media reports said Matsuoka hanged himself in his pajamas with a rope resembling a dog leash and had left multiple suicide notes, including ones addressed to Abe and the public, apologizing for his actions. Police refused to confirm details.

Matsuoka had faced criticism over a scandal involving suspicious bookkeeping practices and was scheduled to appear before a parliamentary committee Monday afternoon for further questioning.

He allegedly claimed more than 28 million yen (US$236,000; EUR176,000) in utility fees even though he rented a parliamentary office where utility costs are free.

Matsuoka also faced separate scandals related to bid-rigging and political contributions, triggering calls for his resignation even from within his own ruling Liberal Democratic Party.

Abe had defended Matsuoka, however, saying the minister's funds were properly handled and his dismissal was not needed. Abe has already been hit by the departure of one Cabinet official, Administrative Reform Minister Genichiro Sata, who was forced to resign in December over alleged misuse of political funds.

Matsuoka's death has compounded Abe's headaches at a critical time ahead of elections for the upper house of parliament on July 22.

On Monday, support for the Cabinet hit its lowest level since he took office last year over a fresh scandal involving missing pension payment records for more than 50 million people, who have been unable to get the money they are entitled to receive.

Approval of Abe's Cabinet fell to 32 percent, down 11 percentage points from a similar poll in April, according to a survey by the national newspaper Mainichi.

"Matsuoka's death is very untimely. It could blow Abe's government away," said political analyst Eiken Itagaki. "Abe will struggle to maintain the slim majority the ruling coalition has in the upper house."

Matsuoka oversaw a powerful ministry in charge of some of the country's most controversial policies, including its whaling program, strict restrictions on U.S. beef imports over mad cow fears, and strong stance on lowering agricultural tariffs at trade negotiations.

But he was dogged by scandal from the outset, admitting soon after taking office that he failed to declare 1 million yen (US$8,500; EUR6,600) in political donations from a scandal-linked group. Recent media reports had also linked Matsuoka to a bid-rigging scheme involving a government environmental organization.

While other Japanese lawmakers have committed suicide in recent years, Matsuoka was the first Cabinet minister since World War II to kill himself while in office.

Japan has one of the highest suicide rates in the industrialized world. More than 32,000 people took their own lives in 2004.

The country also has a deep-rooted tradition of ritual suicide, which was considered an honorable way to restore one's honor or take responsibility for failings in feudal Japan.