Global warming drives up prices on beer in Germany

Like most Germans, brewer Helmut Erdmann is all for the fight against global warming. Unless, that is, it drives up the price of his beer. 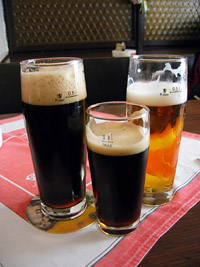 Global warming drives up prices on beer in Germany

And that is exactly what is happening to Erdmann and other German brewers as farmers abandon barley - the raw material for the national beverage - to plant other, subsidized crops for sale as environmentally-friendly biofuels.

"Beer prices are a very emotional issue in Germany - people expect it to be as inexpensive as other basic staples like eggs, bread and milk," said Erdmann, director of the family-owned Ayinger brewery in Aying, an idyllic village nestled between Bavaria's rolling hills and dark forests with the towering Alps on the far horizon.

"With the current spike in barley prices, we won't be able to avoid a price increase of our beer any longer," Erdmann said, stopping to sample his freshly brewed, golden product right from the steel fermentation kettle.

In the last two years, the price of barley has doubled to euro200 (US$271) from euro102 per ton as farmers plant more crops such as rapeseed and corn that can be turned into ethanol or bio-diesel, a fuel made from vegetable oil.

As a result, the price for the key ingredient in beer - barley malt, or barley that has been allowed to germinate - has soared by more than 40 percent, to around euro385 (US$522) per ton from around euro270 a ton two years ago, according to the Bavarian Brewers' Association.

For Germany's beer drinkers that is scary news: their beloved beverage - often dubbed 'liquid bread' because it is a basic ingredient of many Germans' daily diet - is getting more expensive. While some breweries have already raised prices, many others will follow later this year, brewers say.

Talk about higher beer prices has not gone unnoticed by consumers. Sitting at a long wooden table under leafy chestnut trees at the Prater, one of Berlin's biggest beer gardens, Volker Glutsch, 37, complained bitterly.

"It's absolutely outrageous that beer is getting even more expensive," Glutsch said, gulping down the last swig of his half-liter dark beer at lunch. "But there's nothing we can do about it - except drinking less and that's not going to happen."

A meager barley harvest last year in Germany and barley-exporting countries such as France, Australia and Canada has compounded the problem. The price rise is squeezing breweries - many of them smaller, family-owned enterprises that can ill afford it.

The Ayinger Brewery, which has 65 employees and has been family owned since its founding in 1878, produces 7.5 million liters (1.98 million gallons) of beer each year and purchases most of the ingredients from farmers nearby.

Eventually, Erdmann and other brewers say, it is drinkers who will bear the brunt of the higher costs for raw materials.

Already, at the annual brewery festival in Aying this week, prices for Erdmann's Ayinger beer were up at euro6.40 (US$8.60) from last year's euro6.10 for a one-liter (34 fluid ounce) mug. That's no small matter for Bavarians, who are among the world's heaviest beer drinkers. They put away about 160 liters (42 gallons) of beer a year - well above the already high German average of 115 liters (30.38 gallons) per person.

And organizers of the world-famous Oktoberfest in Munich have announced a 5.5 percent price increase: A one-liter mug will cost up to euro7.90 (US$10.70) at this year's autumn beer festival - the highest price ever.

Brewers predict that higher barley prices will add about euro1 (US$1.35) to each 10-liter case of beer, but the German Farmers Association disputes that, saying the figure is about 33 cents (45 U.S. cents). Other factors like higher salaries and energy prices are also jacking up prices.

"The financial pressure on Germany's small and medium-sized breweries is immense," brewers association head Walter Koenig said. "The increasing costs of raw materials may become a serious threat for many breweries."

"Beer drinkers across the country will get upset when beer prices will rise even further in the fall," said Koenig. "We are therefore demanding that government stop its subsidies for biofuels immediately."

However, in its first major report on bioenergy, the United Nations tried to temper enthusiasm over biofuels last week, warning that the diversion of land to grow crops for fuel will increase prices for basic food commodities.

That is what happened in Mexico, when increased demand for corn to make ethanol in the United States pushed up the price of tortillas.

The German government subsidizes biofuel crops at the rate of euro45 per hectare (US$24.60 per acre), according to the Agency for Renewable Energies, part of the Agriculture Ministry.

Biofuels, which reduce the emission of greenhouse gases believed to cause global warming, have been seen by many as a cleaner and cheaper way to meet the world's soaring energy needs than with greenhouse-gas emitting fossil fuels. European leaders have decided that at least 10 percent of fuels will come from biofuels by 2020.

Germany leads in the consumption of bioenergy in Europe with an annual usage of 4.3 percent of overall fuel consumption, according to figures by the Agency of Renewable Energies. Germany also is among the leaders in producing wind energy and recycling garbage.

Beer prices are serious business in Bavaria, which has some 615 breweries and gave Germany its famed beer purity law, which dates back to 1516 and in its current form permits only four ingredients: malted grain, hops, yeast and water.

Farmers say the brewers share some of the blame.

"For years there was an oversupply and we couldn't make any profits with barley and that's why we switched to biofuel crops," said Anton Stuerzer, 43, who grows barley and rapeseed at his farm in the neighboring village of Hoehenkirchen.

"It serves the brewers right that they have to pay those high prices now - they should have paid us fair prices even when there was too much barley available."