Former President Bill Clinton appealed to graduates of Middlebury College in Vermont Sunday to consider everyone when they try to find solutions for the world's problems. 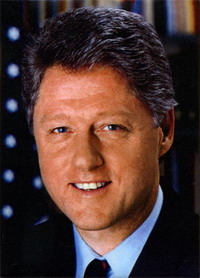 "The bigotry you have to work hard to avoid is not seeing everyone else," he said, touching on a campaign theme of his wife and Democratic presidential hopeful, Sen.Hillary Rodham Clinton.

In his 20-minute speech before 600 graduates and more than 7,000 guests and faculty sitting outside on the Middlebury campus, Clinton told the seniors they must build community by focusing on the similarities among humans rather than differences. The key is "the elemental knowledge that what we have in common is more important than what divides us," he said.

Clinton said he first learned about Middlebury from Ron Brown, his late commerce secretary and 1962 Middlebury graduate who also served on the college's board. Brown died in April 1996 in a military transport plane crash in Croatia.

"A kid who grew up in a hotel in Harlem found a home here because there is a community here in the best sense and that's really what we have to build in the world," Clinton said.