Venezuela government forces most widely watched channel off the air

Television station employees embraced and broke into chants of "freedom!" before the cameras as Venezuela's most widely watched channel prepared to go off the air at midnight, shut down under a decision by President Hugo Chavez. 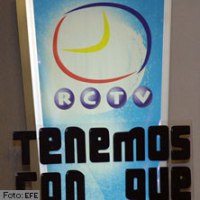 Venezuela government forces most widely watched channel off the air

Radio Caracas Television, the sole opposition-aligned TV station with nationwide reach, was being forced off the airwaves because Chavez refused to renew its broadcast license.

During a speech Saturday night that all private channels were forced to broadcast, Chavez said his decision was a legal move to democratize the airwaves by turning over RCTV's signal to a public service channel.

"That television station became a threat to the country so I decided not to renew the license because it's my responsibility," Chavez said.

"This is a decision that marks a turn toward totalitarianism," Granier said.

RCTV supporters banged on pots and pans, blew whistles and played recordings of air raid sirens in protests that rang out in many Caracas neighborhoods Saturday evening.

The socialist president and his supporters accuse RCTV of supporting a failed 2002 coup against him, violating broadcast laws and regularly showing programs with excessive violence and sexual content.

In 2002, RCTV and other private channels broadcast remarks by opposition leaders calling for protests to overthrow Chavez. The channels also played regular programs such as cartoons and movies instead of covering Chavez's return to power amid protests by his supporters.

Andres Izarra, who now heads the state-financed channel Telesur, said he quit his job as a newsroom manager at RCTV in 2002 because he was disgusted with the way "everything was censored" during the coup.

"The order was 'zero Chavismo on the screen.' Nothing related to Chavez, his allies, his congressmen, members of his party," Izarra told The Associated Press in an interview. "When I hear the owners of RCTV talk about freedom of expression, it seems to me a great hypocrisy."

Granier insisted his channel has never sought to destabilize the government and said he would defend his actions in court if necessary. RCTV's journalists have said that violent protests outside their studios hindered them from covering the news of Chavez's return during the 2002 coup.

RCTV has regularly been the top channel in viewer ratings, but Chavez calls its soap operas "pure poison" that promote capitalism.

Venezuela's Supreme Court ruled Friday that RCTV's broadcasting equipment  including microwave dishes and antennas must be made available to the state-funded channel that will replace it, while the court reviews a legal challenge to the government decision.

The Supreme Court has ordered the military to temporarily guard RCTV's broadcasting equipment.

Most Venezuelan news media are in private hands, including many newspapers and radio stations that remain critical of Chavez.

But the only other major opposition-sided TV channel is Globovision, and it is not seen in all parts of the country. Two other channels that used to be staunchly anti-Chavez, Venevision and Televen, have recently toned down their coverage.

Groups such as Human Rights Watch and Reporters Without Borders have called Chavez's move a flagrant effort to silence criticism. The European Parliament and the U.S. Senate passed resolutions condemning the decision.

RCTV talk show host Miguel Angel Rodriguez, whose program is a daily rant against Chavez, told his viewers Sunday that in protest, "you are free to fly the flag upside down."

"If all of Venezuela does it today, it would be telling the world: We are in a catastrophic situation. We need help."