A problem with a regional air traffic control system led to some flights in and out of Southern California to be delayed Friday morning as the busy Memorial Day holiday weekend began. 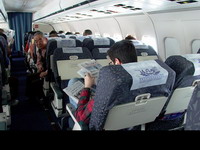 The computer mapping system used by TRACON, the San Diego-based radar center that controllers use to guide flights for 21 airports in the region, failed for about an hour when staff attempted to update the maps early Friday, Federal Aviation Administration spokesman Ian Gregor said.

The computer software generates an overlay of an airspace map on top of the image from the radar, which continued to function.

Gregor said there were about 100 departure delays at airports in the region. Los Angeles International Airport had 37 departure delays, while Lindbergh Field in San Diego had 29.

He did not have figures yet on arrival delays. However, he said, from 5:34 a.m. to 6:22 a.m. (1234 to 1322 GMT), the FAA put a hold on Southern California-bound flights in the western United States that had yet to leave their originating airports.

Another radar facility handled flights that were already in the air during the outage, he said.

"Everything's back up and running but they're all playing catch-up," said Sharie Shipley, spokeswoman for San Diego's Lindbergh Field. "It's probably going to take all day to work through the backlog."