Former White House aide I. Lewis "Scooter" Libby betrayed the public's trust and now had to spend 2 1/2 to 3 years in prison for obstructing the CIA leak investigation. 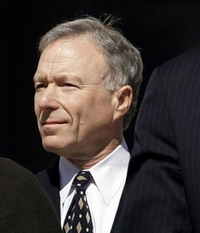 Libby, the former chief of staff to Vice President Dick Cheney and an assistant to President George W. Bush, is the highest-ranking White House official convicted since the Iran-Contra arms scandal two decades ago.

No one was charged with the leak itself, including the initial source of the disclosure, former Deputy Secretary of State Richard Armitage.

Libby's lawyers have said he deserves to be pardoned, but the White House has been guarded about the issue. Top Democrats have urged Bush not to pardon him.

Fitzgerald wrote in court documents: "Particularly in a case such as this, where Mr. Libby was a high-ranking government official whose falsehoods were central to issues in a significant criminal investigation, it is important that this court impose a sentence that accurately reflects the value the judicial system places on truth-telling in criminal investigations."

U.S. District Judge Reggie B. Walton has broad discretion over Libby's fate. Walton faces two important questions: whether to send Libby to prison and, if so, whether to delay the sentence until his appeals have run out.

Libby's lawyers have not filed their sentencing documents yet but are expected to ask that he receive no jail time. They have said that if Walton orders prison time, they will ask that Libby be allowed to remain free during appeals.

Libby was convicted in March of lying to investigators about what he told reporters regarding CIA officer Valerie Plame, whose 2003 exposure touched off the leak probe. Plame was identified in a newspaper column after her husband, former Ambassador Joseph Wilson, began criticizing the Bush administration's prewar intelligence on Iraq.