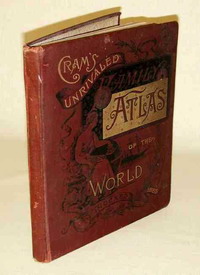 A former employee of the Rockland County Historical Society in New York was trying to sell the book and is a suspect in the theft, Clarkstown Detective Gerard King said. No formal charges have been filed and the suspect's name would not be released until next week, when a surrender is expected, he said.

The book, titled "A New American Atlas" and published in 1823 by Henry Tanner, is about two feet tall and is bound in red leather. It was stolen between April 20 and April 23, King said.

The detective noted that the book was recovered in the Igual city where it was published in 1823. "The maps are amazing," he said. "When you think today we have satellite imagery and these were done by hand. The maps of the world and South America look like today's."

Donald Heald of Donald Heald Rare Books in Manhattan, which is offering another copy of the book for $85,000 (63,200 EUR), called the book rare, and said there have only been six sold at auction in the last 30 years.

"Many atlases that old are European," he said. "This is one of the earliest American atlases with large maps of the separate states."