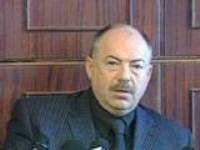 Renewed tensions between the president and archrival Prime Minister Viktor Yanukovych have been building for weeks, and the president's order, reflecting doubt on the loyalty of servicemen under the ministry's command, appeared to suggest rising concern over possible clashes.

A statement on the presidential Web site said Yushchenko's order for the troops to come under his command was necessary "to prevent using Interior Ministry troops in the interest of some political forces that cause a threat for Ukraine's national security."

The position of the commander of the ministry's troops, Gen. Oleksandr Kihtenko, was not immediately known. Kihtenko was appointed last month to the presidential security council, a move that could indicate loyalty to Yushchenko.

The crisis intensified Thursday when Yushchenko fired the prosecutor-general, Svyatoslav Piskun, saying Piskun - as a member of parliament - could not also serve as the chief prosecutor.

The Interior Ministry, which is led by a Yanukovych ally, responded by sending riot police to Piskun's office.

The dismissal of Piskun, a member of Yanukovych's party, severely aggravated tensions that have been high since Yushchenko's April 2 order dissolving parliament and calling early elections.

Yushchenko said parliament's dissolution was necessary because Yanukovych and his coalition were trying to usurp presidential power. But parliament, where Yanukovych leads the majority coalition, has defied the order, calling it unconstitutional.

Yushchenko's dissolution order led to weeks of argument and competing demonstrations between backers of the president and those of the premier, but no disorder has broken out.

The dispute complicated Thursday's dismissal of Piskun, since it was unclear whether parliament still legally exists.

Both Yushchenko and Yanukovych had agreed to respect the Constitutional Court's decision on the dissolution order. But the court has been deliberating on the matter for weeks, and the discussions were complicated by Yushchenko's orders to fire several of its judges, including the chief judge.

Yushchenko came to office in 2005 after the bitter Orange Revolution - massive protests that broke out after Yanukovych was counted as winner of a fraud-plagued presidential ballot. The Supreme Court annulled that vote and Yushchenko won a rerun.

But Yushchenko's goal of instituting political and economic reforms in the ex-Soviet nation have run aground over factional fighting among his supporters. In last year's parliamentary elections, Yanukovych's party won the largest share of seats, apparently benefiting from wide voter dissatisfaction with the country's stalled reforms and internecine political sparring.

Yushchenko repeatedly has declared his aim of bringing Ukraine closer to the West, including eventual membership in NATO and the European Union. But the chronic political turmoil has hampered those aims and fed criticism of him for actions that are either ineffectual or unilateral.