Pakistan's tourism minister withdrew her resignation after government leaders reassured her of their support in the face of condemnation from radical Islamic clerics for hugging a foreign man, a senior official said Thursday. 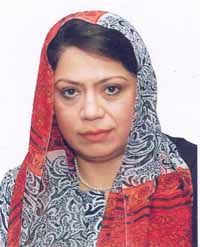 Nilofar Bakhtiar was caught up in a three-month standoff between authorities and clerics at a mosque in the capital. The clerics' campaign to impose Islamic law has involved kidnapping policemen and setting up their own court.

The court at Islamabad's Lal Masjid, or Red Mosque, condemned Bakhtiar last month for un-Islamic behavior after a newspaper published a photograph of her embracing her parachute instructor in France after she made a charity jump to help Kashmir earthquake victims.

However, a spokesman for the ruling Pakistan Muslim League-Quaid party confirmed reports that Prime Minister Shaukat Aziz and party chairman Chaudhry Shujaat Hussain had talked her into staying.

"Both leaders managed to convince her that her complaint was not justified and therefore it would be in the party's interest and her own interest that she resumes her work," spokesman Tariq Azeem said.

Musharraf has insisted that authorities will try to negotiate a peaceful solution to the standoff with clerics running the mosque.

However, officials also have deployed thousands of security forces into the city for a possible raid to free two police officers seized last week.

Officials say weapons have been stored in the mosque, which can call on hundreds of male and female students from two affiliated seminaries and has warned of suicide attacks if security forces intervene.