French President Nicolas Sarkozy launched his drive to get a rapid agreement among European Union nations by next month on a new scaled-down EU treaty to replace the stalled constitution project which his country and the Netherlands rejected two years ago. 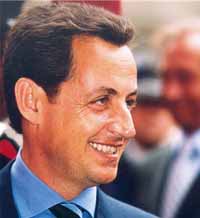 In his first visit to European Union headquarters as the new French leader Wednesday, Sarkozy said efforts to redraft and simplify the existing constitution draft were making progress.

He said that after meeting last week with German Chancellor Angela Merkel, whose country holds the rotating EU presidency, and in talks with European Commission President Jose Manuel Barroso, "we seem to be making headway on the way to a simplified treaty," to replace the EU constitution.

The constitution needs the backing of all 27 EU nations for it to be ratified. French and Dutch voters rejected it two years ago.

Sarkozy said he was now campaigning to unblock the impasse of what to do with the constitution - notably on getting EU leaders to accept a scaled-back, simplified EU treaty passed, and doing away with the current draft constitution.

"It is no use crying over spilled milk ... but France voted no however, and another member state voted no," Sarkozy said. "We need to move forward and a simplified treaty is the way forward. Europe cannot remain at a standstill, we cannot remain in this relative paralysis ... we have to find a way out of this impasse."

The EU constitution was to have streamlined how the bloc makes decisions and bolster its role on the world stage.

It needed the backing of all 27 EU nations for it to take effect, leading to the current stalemate.

Some EU nations, like France, Britain and the Netherlands are now keen to drop more contentious parts of the draft - its name, the post of an EU foreign minister and officially designated anthem and flag - to play down public fears that a constitution would take away powers from national capitals and create a European superstate.

Barroso agreed that "consensus is forming around" a toned-down EU treaty pushed by Sarkozy to replace the draft constitution.

"The main thing is to strengthen Europe's ability to act," Barroso said. "We need institutions to give Europe the means it requires to do what its people want."

Sarkozy's visit to Brussels was only his second trip abroad as president _ and was seen as a signal that the new French leader plans to take a more hands-on approach to France's European policy than his predecessor, Jacques Chirac, did during his 12 years in office.

Sarkozy made his first trip to Berlin just hours after being installed as the new president. Both countries have traditionally been the driving force behind the EU.

Negotiations between EU nations on redrafting the treaty have been under way since January under the close eye of Germany. Merkel wants to strike a deal at a June summit on a more modest rule-book blueprint.

French officials said Sarkozy wants a "simplified" treaty to replace the current constitution, doing away with notions that the existing charter is a "solemn text," as a way to avoid the need for new referendum votes.

France wants to have the smaller treaty approved by the EU nations by next year.

At their talks Wednesday Sarkozy also reiterated his opposition to Turkey's membership bid, but said he was putting aside the matter, for now, until the EU resolved on what to do with the constitution.

"I have not changed my views on this," Sarkozy said. "I believe that Turkey does not have its place in the European Union."

Sarkozy's stance on Turkey runs against a majority of EU leaders who back the two-year-old entry negotiations with Ankara.

Barroso has appealed to Sarkozy not to block entry talks with Turkey. Those negotiations are now on a slow track after Turkey refused last year to implement a customs union pact with EU member Cyprus, which Ankara does not recognize.

Sarkozy has instead proposed Turkey be included in the creation of a "Mediterranean Union" modeled on the EU, but not part of it, something that has angered Turkey.