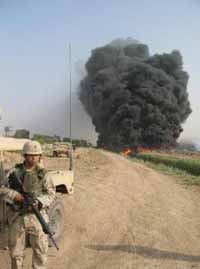 The attack hit a deserted well about 4 a.m. in the Hanjirah area, about 25 kilometers (12 miles) northwest of the northern city of Kirkuk, the official said on condition of anonymity because he was not authorized to speak to the press.

Oil production has plummeted since the U.S.-led invasion in March 2003 as the oil pipelines have faced repeated insurgent sabotage, attacks on maintenance crews, alleged corruption, theft and mismanagement.