Moderate Palestinian President Mahmoud Abbas and Prime Minister Ismail Haniyeh of Hamas made a new push to restore a cease-fire with Israel that collapsed under Hamas rocket fire. 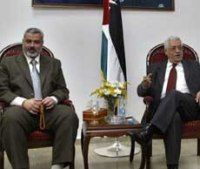 The two leaders met for the first time since Hamas-Fatah fighting broke out two weeks ago and killed more than 50 Palestinians. The two sides reached a truce over the weekend, but tensions remain high because a key dispute over control of the security forces remains unresolved.

Intensified Hamas rocket fire that accompanied the Palestinian infighting touched off a week of Israeli airstrikes that have killed more than 40 Palestinians, most of them militants.

A Haniyeh aide, Ahmed Yousef, said a renewed cease-fire with Israel would have to be comprehensive, and include the West Bank in addition to Gaza. The previous truce, brokered in November, applied only to the Gaza-Israel border, and Israel rejected repeated Palestinian demands that it also halt arrest raids in the West Bank.

"If it is going to be for Gaza only, then no one will be able to convince the Palestinian resistance factions to commit to that," Yousef said.

The meeting ended with the two sides agreeing their factions would meet again.

"We are working to recommit to the truce," Abbas aide Nabil Abu Rdeneh said.

Haniyeh aide Ghazi Hamad said in a statement that the two leaders called on the international community "to protect the Palestinians and pressure Israel to stop the attacks."

Abbas arrived in tense Gaza on Tuesday under unprecedented security precautions. Five identical black Mercedes limousines drove in his convoy to confuse potential attackers. Presidential security forces locked down central Gaza thoroughfares and marksmen staked out rooftop vantage points. Abbas aides have said there was concern he might be targeted on his drive from the Israeli border crossing to Gaza City.

On Tuesday evening, he held talks with Egyptian mediators in Gaza City, who updated him on efforts to contain the internal fighting and halt the rocket fire.

Hamas militants, meanwhile, fired only one rocket toward the Israeli border town of Sderot on Wednesday, a letup after far heavier barrages in preceding days, including one that killed an Israeli woman.

Israel, in turn, fired missiles at suspected Hamas weapons workshops in Gaza City and the Jebaliya refugee camp. The Jebaliya strike injured six people, including a pregnant woman and a teenage boy.

In a new tactic, Israeli troops also made a brief foray deeper into Gaza early Wednesday, searching several homes about half a mile from the border and briefly detaining seven Palestinians. Soldiers left behind handwritten notes warning that houses could be demolished if rockets are fired from the property.

Last week, Israeli Defense Minister Amir Peretz said Israel was not considering a major ground offensive in Gaza at this time, and that the military had other tools in its arsenal to try to halt the rockets.

"We don't care if he's a ringleader, a perpetrator of rocket launching or if he is one of the political leaders," Sneh said. "No one has immunity."

Wary of Israeli strikes, leaders of Hamas and other Palestinian militant groups in Gaza have lowered their profiles, turning off cell phones and staying off the streets.

In Gaza, Hamas spokesman Sami Abu Zuhri threatened harsh retaliation if the group's leaders were attacked. "Harming ... any of Hamas' leadership will cost the occupation dearly," he said. "This will mean responses." He did not elaborate.

Israel's government, meanwhile, evacuated hundreds of Sderot's 24,000 residents to hotels in other parts of the country for the Shavuot holiday, which began at sundown Tuesday. The evacuation was orderly, and Israeli soldiers helped people board the buses.