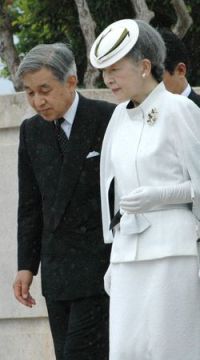 The Japanese couple are on a 10-day European tour that also includes stops in the three Baltic countries and Britain. Later Tuesday, they were scheduled to have lunch with Swedish Prime Minister Fredrik Reinfeldt.

On Wednesday, the emperor and empress attend the 300th anniversary celebrations of the birth of Carl Linnaeus, a Swedish scientist known for creating a system for scientifically classifying living organisms.

On May 24-27, the imperial couple will travel to the Baltic countries to meet leaders in Estonia, Latvia and Lithuania.

On the last leg of the trip, they are scheduled to visit London on May 27 and will meet Queen Elizabeth II. They were to return to Japan on May 30.