Woman is charged for conspiracy in smuggling attempt

A woman who rode in the cab of a truck during America's deadliest human smuggling attempt and testified against the driver was imprisoned for a few days, she had already served. 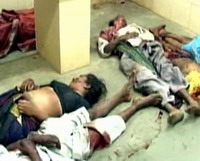 Woman is charged for conspiracy in smuggling attempt

Fatima Holloway of Ohio had pleaded guilty to a conspiracy charge related to the 2003 smuggling attempt that resulted in the deaths of 19 illegal immigrants. She had served three days in jail after her arrest, according to court records.

As part of a plea agreement, Holloway, 32, testified against the tractor-trailer's driver, Tyrone Williams, who was sentenced to life in prison in January.

At Williams' trials in 2005 and 2006, Holloway told jurors he ignored her pleas to free the more than 70 immigrants crammed in the back of his sweltering trailer as they made their way from South Texas to Houston.

Holloway, who has been out on bond since her arrest, said during tearful testimony she could hear the immigrants and that they rocked the trailer back and forth in an attempt to get Williams' attention.

After discovering the dead bodies strewn inside his truck, Williams abandoned the trailer at a truck stop near Victoria, about 100 miles southwest of Houston. Williams and Holloway drove off in the truck. Williams was later arrested at a Houston hospital, while Holloway was arrested in Cleveland.

Holloway testified in both the trial and retrial of Williams. He was convicted in 2005 of 38 counts, but jurors deadlocked on 20 others. In January, he was convicted of all 58 counts.

Craig Washington, Williams' attorney, tried to discredit Holloway's testimony by saying she made inconsistent statements about the smuggling attempt and implying she might have overstated how loud the immigrants were in the trailer.