Abdul-Aziz al-Hakim leader of Iraq's Shiite party suffers from "limited tumor" to be treated in Iran.

Abdul-Aziz al-Hakim, leader of Iraq's largest Shiite party, said that tests carried out in the United States have shown that he suffered from a "limited tumor" and that he will be treated in Iran. 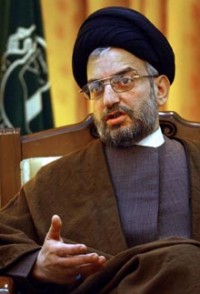 Abdul-Aziz al-Hakim leader of Iraq's Shiite party suffers from "limited tumor" to be treated in Iran.

Al-Hakim did not say where the tumor was, but officials close to him said he was diagnosed with lung cancer after undergoing tests last week at the University of Texas M.D. Anderson Cancer Center in Houston.

"The results of those tests in America showed a number of limited inflammations and a limited tumor," al-Hakim, 57, said in comments from Iran broadcast by Iraqi state television. rrreid

He said he was told that "they can be easily controlled and treated."

Al-Hakim is a key player in Iraqi politics and despite his close ties to Iran, he has been a major partner in U.S. efforts to build a democratic system after the collapse of Saddam Hussein's regime in 2003. He heads parliament's largest bloc, the United Iraqi Alliance, whose members dominate Prime Minister Nouri al-Maliki's government.

American efforts to push through major reforms such as a new oil law, constitutional amendments and expanded opportunities for Sunnis in government would face even more hurdles without al-Hakim's active support.

Al-Hakim, seated on an armchair, appeared relaxed and occasionally smiled during his brief comments, the first by him since news of his ailment first broke Friday.

"My treatment will not last long and I will return home in the nearest opportunity, God willing, to resume my normal duties," he said, adding that his treatment would begin within days.

Al-Hakim flew suddenly to the U.S. on Wednesday for tests after doctors at a hospital in Baghdad detected signs of cancer in one of his lungs. Al-Hakim, leader of the Supreme Islamic Council since 2003, left the U.S. early Sunday for Iran, where he was expected to undergo chemotherapy treatment, according to the officials, who spoke on condition of anonymity because they were not authorized to discuss his condition.

Iran, Iraq's Shiite neighbor to the east, hosted al-Hakim in exile for more than two decades during Saddam's rule. His party, formerly known as the Supreme Council for the Islamic Revolution in Iraq, was founded there with Iranian help in the early 1980s.

Al-Hakim, who gave up a 30-year smoking habit last year, has been coughing and suffering from high blood pressure for months, the officials said. His cough became considerably worse during two days of party meetings this month, when he was re-elected party leader.

"I did not mean to add to your worries, but this is God's will," said al-Hakim, wearing his customary black turban and clerical robes. He said he decided to be treated in Iran because he wanted to be closer to home and because the medical facilities needed for his treatment were available there.