An opposition party leader alleged that the fatal shooting of another opposition figure had ben ordered by the government, but the top government figures rejected the claim. 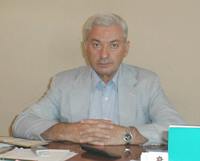 Police say a man arrested shortly after the shooting has confessed, but they declined to give further details out of concern about compromising the investigation.

Sharadze, who led the Faith, Fatherland and Language movement, was a prominent critic of Western influences in Georgia and had especially denounced the civil-society work funded by U.S. philanthropist George Soros.

Under President Mikhail Saakashvili, Georgia has assiduously pursued closer relations with the West, including eventual membership in NATO and the European Union a policy that angers many nationalists.

"This was a political contract murder. I categorically assert that the contractors are the authorities of the country," said Irina Sarishvili, head of the center-right Imedi party.

Levan Bezhuashvili, a top figure in the parliamentary majority coalition, said "the attempt of the opposition to place all of this in the hands of the government comes from the region of fantasy."

Neither Saakashvili's office nor the government issued a statement on the killing.