First 88 Burundi refugees of 8,500 leave Africa for new life in the United States

A group of 88 Burundians who have lived as refugees in neighboring Tanzania for up to 35 years become the first of about 8,500 to leave Africa for a new life in the United States. 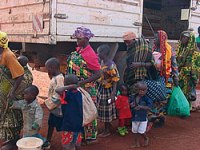 First 88 Burundi refugees of 8,500 leave Africa for new life in the United States

The U.N. refugee agency said the Burundians flew from Kibondo Camp in western Tanzania to the Kenyan capital Nairobi, from where they will continue on to various cities in the United States, including Atlanta and Phoenix. Other locations have yet to be determined, U.S. officials said.

The resettlement was offered by the U.S. government in October after the U.N. High Commissioner for Refugees issued an appeal to find a new home for thousands of Burundians who fled their country's 12-year civil war in the 1970s.

UNHCR said a further 3,000 refugees would leave Tanzania for the U.S. over the next 15 weeks, and the remaining 5,400 Burundians would follow by the end of the year.

The agency said its priority was to repatriate as many Burundians as possible, but that some refugees including the group leaving Tanzania now would face severe difficulties reintegrating in their homeland after decades abroad.