The rebel leaders in the Central African Republic had agreed to begin sending several hundred child soldiers home to their families. 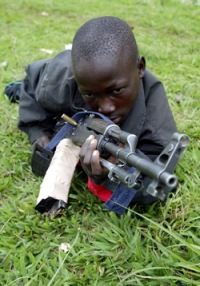 In a statement, a spokeswoman for UNICEF said Gen. Damane Zakaria, whose army controls a portion of the northeast of the country, had agreed to liberate around 400 children. An initial list of 220 child soldiers was handed to UNICEF last week.

Last month, Zakaria's men and the government signed a peace accord. The group led by Zakaria, however, is only one of several rebel factions active in the nation of 3.6 million.

Contacted by telephone in his rebel stronghold of Gordil, 450 kilometers (280 miles) from Bangui, Zakaria confirmed that the rebel Union of Democratic Forces Coalition was prepared to sign an agreement with the U.N. agency in coming days. He estimates that roughly 500 children will be freed as a result of the accord.

"The liberation of these child soldiers will be a good thing for the rebellion because we want all of them to go back to school or learn a job," Zakaria said.

UNICEF spokeswoman Anne Boher applauded the agreement, noting that the Central African Republic had not even signed an international accord meant to end the use of children as soldiers.

"This move signals a voluntary step on the part of armed groups in CAR toward respecting children's rights," she said.

Central African Republic has suffered decades of army revolts, coups and rebellions since it gained independence from France in 1960. Poor and landlocked, it is governed by President Francois Bozize, who came to power in a 2003 rebel war that ousted his predecessor.